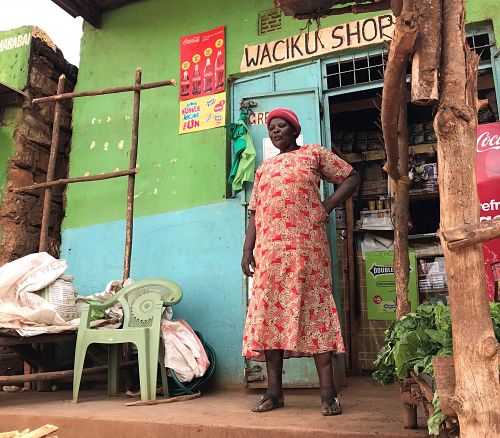 Suzanne is not just a grandmother – she is also an entrepreneur. With the help of a test model of KickStart’s solar irrigation pump, Suzanne is able to support her family – and run her store and her farm – at the same time:

Before she purchased the pump, Suzanne had been using buckets to water her crops, which limited how much and what crops she could grow. She struggled to generate enough of a profit to support herself beyond her basic household needs. Plus, lifting the heavy buckets was hard for her, as it caused her a lot of shoulder pain.

After irrigating with a KickStart solar pump test model for over a year, Suzanne is now growing more nutritious and more profitable crops, like tomatoes, spinach, kale, and beans. She also has her own roosters and cows, and sells some of her produce at her store.

By irrigating with the solar pump test model, Suzanne has generated enough of a surplus of income and crops to support herself, her children and her grandchildren. With the extra money, she can also buy goods for her store, such as flour, rice and cereals, and pay the store’s rent.

Now, she has purchased building materials for her two sons so that they can build their own houses. Someday, she would like to pay for her sons and her daughter to receive skilled training so that they can get high paying jobs and support themselves. Her dream is to continue expanding her farm and empowering the next generation.

KickStart’s irrigation tools have been proven to transform the lives of tens of thousands of farmers and their families, particularly women – thus breaking down the barriers of inequality and helping to bridge the gender gap.

By empowering women, we are giving them the opportunity to hone their entrepreneurial skills, and earn a lot more money.