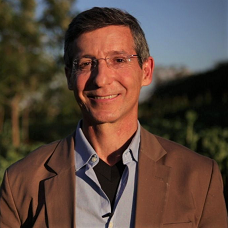 As a child in upstate New York, Martin Fisher often spent time in his family’s basement building things, taking things apart, and putting them back together. He wanted to understand how they worked – and how he could make them better. It’s a trait that has served him well as an inventor and social entrepreneur.

Fisher was born in London and moved to the United States when he was eight years old. His father is an academic theoretical physicist, and his mother is a social entrepreneur who founded the Ithaca Festival – an annual three-day music, arts and dance festival in Ithaca, New York.

Fisher earned a bachelor’s degree in mechanical engineering from Cornell University in 1979, followed by a master’s and doctorate in mechanical design and theoretical and applied mechanics from Stanford University. While finishing his Ph.D., Fisher traveled to Peru to trek in the Andes and ponder his future. In South America he first encountered poverty in the developing world. He reflected on how the development of new technologies had advanced global societies and wondered if engineering could also play a critical role in solving global poverty. Answering this question became his life’s calling.

Fisher expected to be in Kenya for 10 months. He stayed for 17 years. After his Fulbright Scholarship ended, he spent the next five years working for ActionAid, a British non-profit organization. He developed new low-cost building technologies, constructed low-cost school buildings, established a large rural water program, created workshops to produce farm equipment, designed aids for the disabled, and trained youth and women’s groups to start businesses. During this time, Fisher met Nick Moon, his future business partner.

Fisher and Moon became frustrated by the lack of sustainable impacts on poverty, and they began to study the root causes of these failures. Development agencies continuously spent large amounts of time and money to better poor communities, only to have the work they put in place deteriorate soon after their workers left. Fisher thought: How was it that well-intentioned and well-implemented projects could fail to create lasting change? Fisher and Moon’s inquiries led to the simple conclusion that just like anyone, the number one need of poor families in Africa is “a way to make more money,” and from this they developed a new model for fighting global poverty

In 1991, Fisher and Moon left ActionAid and co-founded ApproTEC, the non-profit that would become KickStart. By bringing together the entrepreneurial spirit of the poor, innovative tools and technologies, and the power of the marketplace, they developed a cost effective and sustainable way to help families lift themselves out of poverty. They started to design affordable moneymaking tools and mass-market them to the poor, who in turn bought the equipment and used it to establish highly profitable family businesses.

Fisher started by designing an oil seed press and a press for making stabilized soil blocks. These and his other early designs have been used to create hundreds of profitable businesses. However, by 1997 he realized that because the vast majority of the poor in the world are small-scale farmers, irrigation technologies that enable farmers to move from subsistence to commercial irrigated farming could have the greatest impact on global poverty. With his team of designers, Fisher developed his first MoneyMaker Pump. Today more than 327,287 pumps have been sold.

By 2001, ApproTEC had proved the power of its model and its designs, and Fisher returned to the United States to establish a small fundraising office in San Francisco. In 2005, the African and U.S. organizations were combined as a single U.S.-based non-profit social enterprise called KickStart.

Fisher continues to design and invent in addition to his role as CEO of KickStart. He believes that design is most successful when approached collaboratively, and he continues to mentor and direct a team of designers and engineers in Kenya. He also works with designers in the United States, both from universities and renowned firms like IDEO.

Fisher is an established lecturer who speaks at top engineering and business schools, as well as at major design, international development, and social enterprise-related conferences.

Fisher has won numerous awards and recognition for his inventions and work as a social entrepreneur, including the IDEA Design Gold Medal, TIME Magazine’s 2003 European Hero award, 2005 Skoll Award for Social Entrepreneurship, and the Schwab Foundation’s “2003 Social Entrepreneur of the Year” award.

In 2008 he was named Engineer of the Year by Design News magazine. Also in 2008, he received the prestigious $100,000 Lemelson-MIT Award for Sustainability” for his achievements in transforming the lives of hundreds of thousands of poor Africans though invention and innovation.